More
Home BETTING TIPS Germany At EURO 2021: How Will They Compete In The "Group Of...
BETTING TIPSSPORTS BETTINGSPORTS NEWS 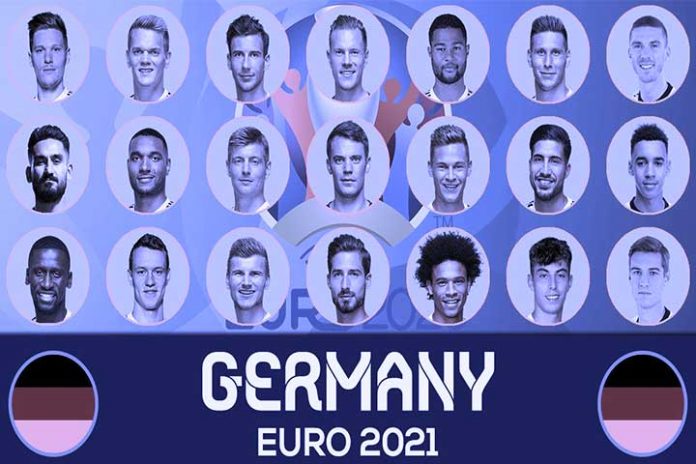 Germany at EURO 2020 – Qualifying round

Germany prevailed in a group that also included the Netherlands, Northern Ireland, Belarus, and Estonia. His record was 7 victories and one defeat, scoring 30 goals and conceding 7. The defeat came against the Netherlands on matchday 5. Their top scorer in the qualifying phase was Serge Gnaby with 8 goals.

The coach who leads the team is Joachim Low, who has already announced that this will be his last tournament in charge of Germany. He has been on the bench of the German national team for no less than 15 years, highlighting among his triumphs the World Cup achieved in 2014. In recent years, the team’s performance has dropped significantly, and doubts about the continuity of the German coach have increased.

His game system is with three defenses, either 3-4-3 or 3-4-1-2. However, if the opponent requires it, he can also play a 4-3-3. Real Madrid veteran midfielder Toni Kroos and teammate Joshua Kimmich are undoubtedly the stars of the team. The player to watch closely at this European Football Championship will be Kai Havertz, whose goal in the final gave Chelsea the Champions League.

It isn’t easy to anticipate what will happen in this group. The only result we can expect is victory over Hungary.

In any case, the most normal thing would be to see Germany qualifying for the round of 16, either directly as 1st or 2nd in the group, or indirectly as one of the 4 best third parties in the Eurocup group stage.

Interestingly, they are the favorites to win Group F at odds of 2.25, and their classification to the eighth has the lowest odds of this group, at 1.08 in the bookmakers.