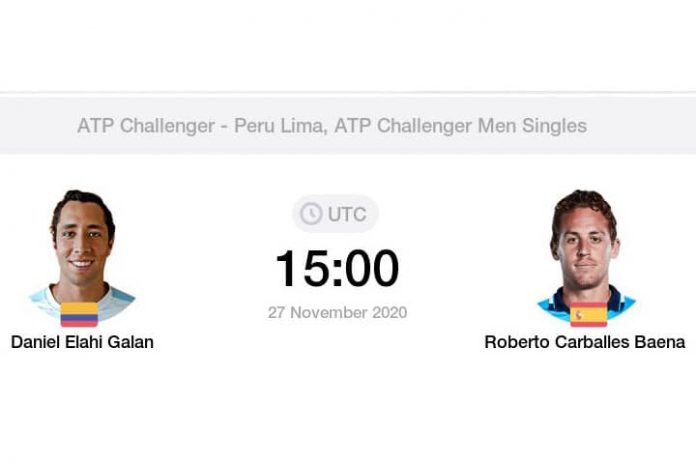 The Colombian beat Spanish Iñigo Cervantes 6-3 and 6-2 in the Second Round, in one hour and 10 minutes of play. In the First Round, he had done the same against the Argentine Agustín Velotti (6-3 and 6-1).

This season, the current 129 of the world finished with a record of 4 wins and 3 losses in ATP competitions. His great week was at Roland Garros, where he first successfully made it through qualifying and then climbed to the Third Round.

In his first pair of games in the main draw, he defeated Britain’s Cameron Norrie (5 sets) and American Tennys Sandgren (straight sets). Already in the third step, he could do little against Novak Djokovic (0-6, 3-6 and 2-6).

As far as Challenger tournaments are concerned, the Bucaramanga-born has the best record in the Final on Newport Beach cement (der Vs Thai-Son Kwiatkowski).

The second-seeded needed 3 sets to beat Argentine Renzo Olivo 5-7, 6-0 and 6-4 in the Second Round in two hours and 45 minutes of action. In his debut, everything was easier against the Peruvian Mauricio Echazú (6-1 and 6-0).

Last week, the man from Tenerife made the semifinals at the Guayaquil Challenger. In this instance, he fell forcefully against the Argentine Francisco Cerundolo (2-6 and 1-6).

The current 102 of the world ended the calendar with 6 wins and 8 stumbles on the big circuit. His most outstanding performance also came on the clay of Roland Garros, where he retired due to injury in his Third Round engagement against Bulgarian Grigor Dimitrov (1-6, 3-6 y ret).

There are two ways to foreshadow the outcome of this match. By experience and record, Carballés is a clear favourite. If we only focus on the present, Galán starts this match with a slight advantage over the Tenerife.

The Colombian reaches the end of the season with confidence, something that can be seen in the results he obtained in the first rounds. It was far superior to its rivals, leaving no doubts as to its performance. If you maintain that intensity, you have a good chance of moving forward.

Although the Spanish have a broad curriculum in this type of appointments and with a greater experience in ATP World Tour tournaments, he is not seen at the level that he could claim. In the Second Round, he was very close to being eliminated against Olivo, showing that everything is costing him too much. The main bookmakers agree with our prediction, although the truth is that the match will be defined by details.