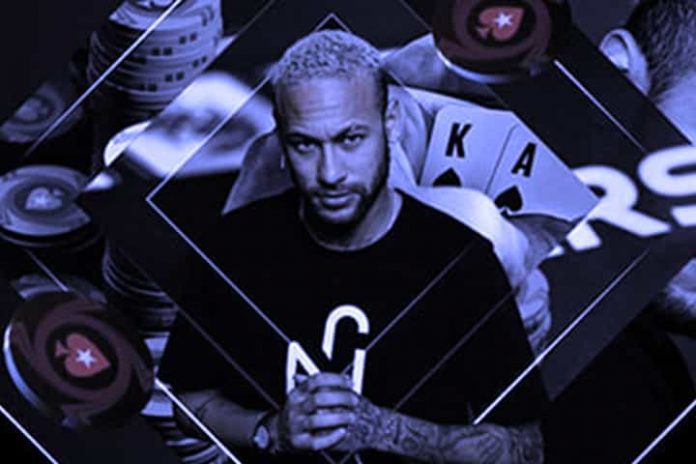 The Brazilian star of PSG and former Barcelona Neymar is once again collaborating with Pokerstars to promote the brand. It is a collaboration that will take the commercial relationship beyond the advertising field, with the particular actions to which the room with the great red pike is accustomed.

Neymar, A Footballer From The Pokerstars Profile

Neymar’s profile, his extraordinary level as a footballer and his well-known love of poker are qualities that fit perfectly with Pokerstars. The purpose of the poker room is for Neymar to bring his particular style and defined personality to the tables at events both live and through the internet.

As a preview of the collaboration between Neymar and Pokerstars, the brand has already released a video on YouTube. In it, you can see Neymar relating his style of play on the field with his attitude at the poker table. The message that Neymar gives is that he is “IN”, that is to say, that he is inside the game and Pokerstars.

Neymar commented that when he does not play football, what he likes is to have fun and compete with his friends, for example, playing cards because of the atmosphere that is generated and for more specific actions such as unexpected turns that occur in the hands.

Neymar considers himself a fan of Pokerstars and shows his desire to start this relationship, as well as being able to provide fans with special and fun moments.

Pokerstars As A Global Entertainment Brand

The agreement came after the completion of the renewal of Pokerstars as a global brand, which is also undergoing a corporate change to become a leading entertainment company.

One aspect that Pokerstars is raising a lot of awareness about is the safe play, which occupies a prominent space in this new concept of the brand. In this regard, it has already started broadcasting televised messages on this issue and emphasizing the commitment that Pokerstars shows to the safety of its players.

The responsible gaming team at Pokerstars has been recognized for its work on several occasions and therefore occupies a very important part in this new phase of Pokerstars.

The global director of the Pokerstars brand, Martin Nieri, described Neymar as a world-class player and a truly passionate about poker.

Nieri expressed his desire to be able to bring new emotions and content to the Pokerstars community of players thanks to this new signing.

Pokerstars is the most prestigious poker room in the world. It began operating in 2001 being the house in which more tournaments, events and cash tables have been played. Its team of professionals has included the most important faces in the world of pokers such as Daniel Negreanu, Elky, Jason Mercier, Chris Moneymaker or Vanessa Rousso.

At its tables, more than 200,000 million hands have been distributed, and among other milestones, it organized an online tournament so extensive that it was signed into the Guinness Book of Records.

Also Read: How To Play Poker Successfully – 13 Tips And Tricks

The terminology in online poker is very relevant, especially for those users who want to reach a high level as players. Surely many of...
Read more
POKER NEWS

Counting Cards In Poker, Is It A Good Trick?

We are facing a technique that is always controversial , but that is still used by many players. Counting cards in poker means that...
Read more
BETTING TIPS

The Best & Top 12 Of Online Bookmakers

This list is based on our experience and reflects our personal opinion. What Is The Best Bookmaker? In our opinion, a good sportsbook gives you good...
Read more