This Will Safely Remove The PS5’s Side Panels 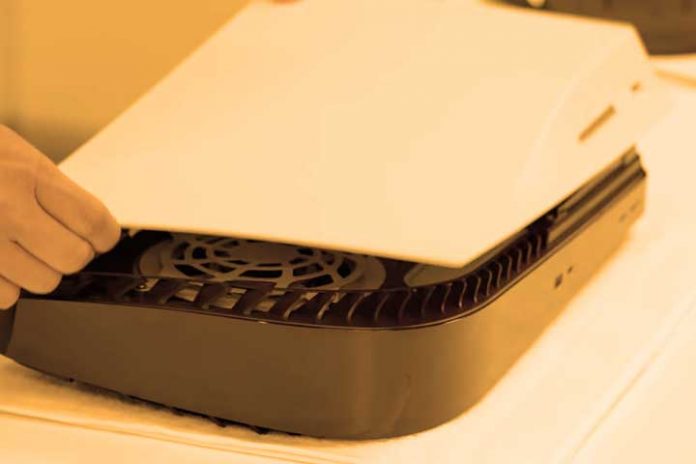 The PlayStation 5 is also in demand months after its release and is hard to come by. Fans are not only enthusiastic about the hardware but also the design. The latter is, of course, a matter of taste, but compared to the Xbox Series X, it is much more futuristic. An integral part of the PS5 is two side panels, which primarily have an optical effect. They give the console that unique something, and Sony has also thought of something. The side panels look stylish and can also be removed, which makes cleaning much more accessible, among other things. While removing is not difficult, it is essential to know the exact process. Otherwise, it can happen, for example, that a bracket on the plate breaks off.

In the first step, the PlayStation 5 is switched off, and all cables are disconnected. The latter is not mandatory, but it makes the whole thing more convenient.

The console is now placed so that the PlayStation logo, located on one of the side panels, is positioned at the top right. You can also say that in this position, you are looking at the front of the PS5.

The side plate is carefully lifted at the logo and pushed to the left (i.e., towards the bottom of the console). This releases the hooks, and the side panel can be removed.

It works the same way with the second plate. The lifting position is where the PS logo was on the other side. Then slide it back towards the bottom of the console, and the second side panel is off.

Both are attached in the reverse process. So just put the hooks in the openings and make a sliding movement again (this time in the other direction).

The reasons for removing the side panels are different

A primary reason for this action is, of course, cleaning. Although the powerful console usually lingers in one place, dust collects over time, even in the minor cracks. So it makes sense that the plates are removed now and then for a cleaning process.

Another is the redesign. Although the PlayStation 5 makes a very modern and futuristic impression with the white side panels, not everyone likes the color. Alternative plates (such as a different color or an incorporated pattern) have not yet been offered by Sony, but third-party providers do. There is a choice of both new plates and skins to be glued on. Tip: Read the customer reviews before buying because, as mentioned, the products do not come officially from Sony, so the accuracy of fit plays an important role.

Of course, this point also includes paintwork. For many, this is an exciting option because there are no limits to the choice of colors. However, manual dexterity is a prerequisite for achieving a good result.

Sony has made it very easy to remove the two side panels of the PS5. A big plus point that will please many users. Furthermore, several situations require this step. It starts with cleaning and ends with redesigning. In the second case, there are no limits to the imagination.

Also Read: PS5: Install The Firmware Update 2.0 Immediately If It Is Available

The competition between sites offering gambling for money is constantly increasing. And users benefit from this – the projects literally fight for customers and...
Read more
ONLINE GAMES

About half of the population engages in online gaming from time to time. Many of them gamble regularly. It is therefore important to think...
Read more