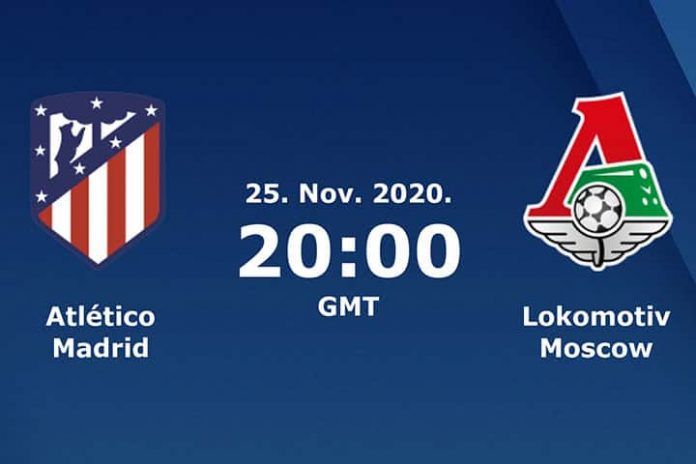 Atlético de Madrid has an accessible place in the next round of the Champions League but a lot is at stake in this game. At the moment it is 2nd in Group A with 1 victory, 1 draw and 1 defeat, with 4 goals in favour and 7 against, this last figure influenced by the defeat suffered on matchday 1 against Bayern Munich by 4 to 0.

Then they defeated Salzburg at home by 3 goals to 2 and last day on Russian soil, they tied at 1 with Lokomotiv with a goal from José María Jiménez.

Since this game, they have played 2 league games both very successfully. They beat Cádiz 4-0 with goals from Marcos Llorente, Luis Suárez and a double from Joao Félix; and this same Saturday they took the victory against Barcelona 1-0 with a goal from Yannick Carrasco.

Luis Suárez and Torreira are out due to the happy illness, and Héctor Herrera and Vrsaljko due to injury. Vitolo’s participation is in doubt.

Lokomotiv Moscow has options to qualify for the next phase, although they know that their chances depend to a large extent on the result of this match.

They started tying at 2 at the Salzburg stadium, to later play a good game against the great favourite that is Bayern in which they finally lost 1-2 and on the last day they drew 1 against Atlético de Madrid with a goal. work of Antón Miranchuk.

In the Russian Premier League they are in 8th position, and this Saturday they broke a streak of 3 consecutive defeats by beating Arsenal Tula by 1 to 0, with a goal again from Miranchuk and also from the penalty spot.

The Lokomotiv casualties for this match are Barinov and Lystsov. Possibly the Lokomotiv will jump to the Wanda with Guilherme; Zhivoglyadov, Murilo, Rajković, Rybus; Ignatjev, Krychowiak, Kulikov, Anton Miranchuk; Zé Luís and Smolov.

This Atlético of the last days plays much more on the attack, distributes the ball with joy and generates scoring chances, with an ambitious and winning character that makes him unstoppable.

Considering that he plays at home and that Russian teams tend to lower their performance in Europe at home, my forecast is that Atlético de Madrid will win.

As an alternative bet to improve the odds for the rojiblanco team is that Atlético win and both teams do not score, something that is paid at 1.77.

Another bet at a similar odds is that Atlético win with a handicap of -1 applied to their scoreboard, an event that is at odds 1.75.

The Best MMO Games For Beginners

The Best Strategy Games For PC